Welcome to your first lesson in learning the Korean language, below are the essential vowels and consonants that you will be confronted with in everyday Korean. Take your time to learn and memorise these as you will need these going forward for the upcoming lessons.

1. Introduction: Hangul is the official alphabet system of the Korean language. It was invented by King Sejong the Great in 1443 and is considered one of the most scientific writing systems in the world. Hangul consists of 24 letters (10 vowels and 14 consonants) and is written in syllabic blocks.

6. Writing Practice: Once you have learned the letters and their pronunciations, it is time to practice writing. Start with simple words such as “hello” (안녕하세요) and “thank you” (감사합니다). As you become more comfortable with Hangul, you can start to write more complicated words and sentences

The Korean script / alphabet is one of the most special languages in the world, it consists of one essentially special feature that would set it apart from most languages.
In English we generally write from left to right hand side and generate worlds in that order, however in Korean, you would generate worlds in syllable blocks.
A quick example of this would be the word thankyou in Korean komapsumnida which in English would comprise of k-o-m-a-p-s-u-m-n-i-d-a whereas a Korean syllable block would generate ko-map-sum-ni-da. Lets begin to look at the basic Korean vowels and consonants of the Korean alphabet.

Note that ' ' ' means the letter is aspirated, i.e a sharp sound. 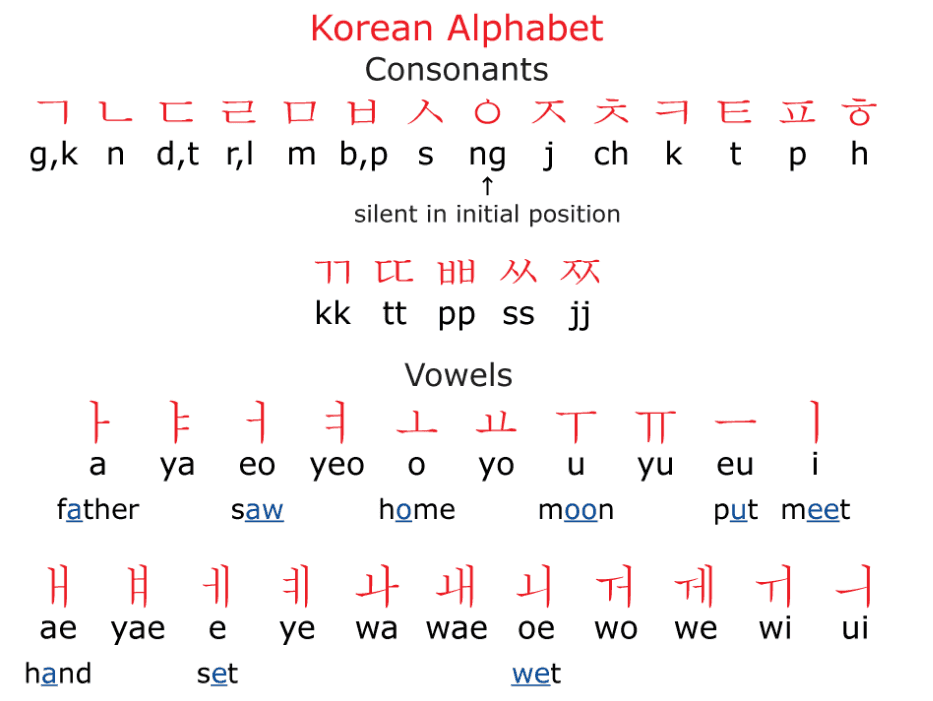 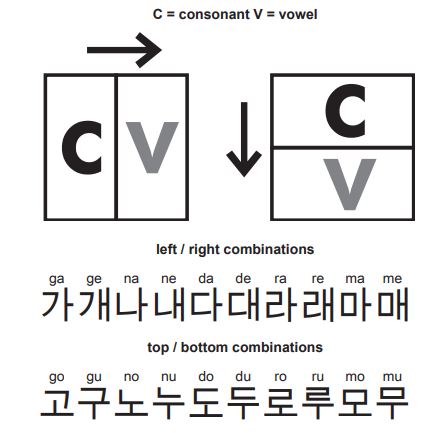 Here is an example of how you can compose a word in korean.

한국 pronounced HanGuk meaning Korea korean
In Korean every syllable block will consist of a consonant letter first, it can however begin with a vowel in which case we would add a null syllable that looks like 'o'. This would then have a consonant letter either to the right or underneath it.
In every Korean syllable, there would also be a consistency of having a vowel and a consonant.
In Korean the two vowel symbols ㅏ and ㅗ are called "bright vowels" as they sound sonorous to native Korean speakers. The other vowels derived from them are also called "bright vowels" which are ㅙ, ㅘ, ㅐ. The dark vowels are the opposite and compose of ㅓ, ㅜ. The neutral vowels are ㅣ, ㅡ.

Below as some useful words and phrases for beginners.
ajossi
waiter
hana
one
ojingo
squid
soju
Korean alcohol vodka
issoyo / iss-
there is
maekju
beer
juseyo
give me please
yogi
here
kwail
some fruit


Donate just £2 to use to help keep us FREE.

Lesson 3 - Use of Consonants and Vowels

Discover our other services