Why should I learn korean?

Tired of reading the subtitles when you watch Korean dramas?

Start for FREE to learn Korean.

Join people from all over the world and start learning online right now.

Check out our classes. Our beginner, intermediate, and advanced lessons are a good place to start.

We also have our online forum with Facebook where you can talk to others and help each other.


The Korean language is incredibly ancient and has been existing for thousands of years; it has an alphabet system that is comparable to English but has a totally distinct tone than English does. Reading is a lot less difficult once you've become used to the alphabet.

More than 75 million people speak Korean. Of those, 48 million live in South Korea and 24 million live in North Korea. More than 2 million people speak the language in China, about 1 million in the US, and about 500,000 in Japan. Both South Korea (Republic of Korea) and North Korea (Democratic People's Republic of Korea) use Korean as their official language. The two Koreas have some small differences in spelling, alphabetization, and vocabulary (like the names of the letters), but they mostly agree with the unified standards that the Korean Language Society put forward in 1933.

When Korean words are used in English or other languages, they are written in many different ways.
For example, a common Korean last name can be written as I, Yi, Lee, Li, Ree, Ri, Rhee, Rie, Ni, etc. Most people who speak English use the McCune-Reischauer system, which writes words pretty much the way they sound to an American ear. Even though it is awkward, this description uses the McCune-Reischauer system. In that system, the common last name is written as Yi, which sounds like the English word for the letter e. Many linguists prefer to use the Yale romanization when citing sentences because it is closer to the Korean writing system and doesn't need diacritics to show the difference between vowels. See the table for a comparison of the two systems. 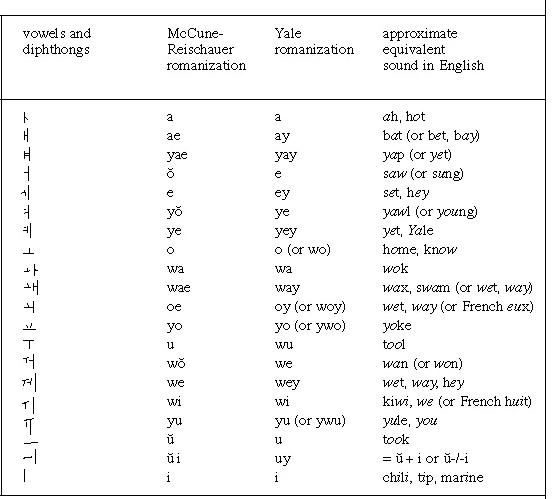 The vowel nucleus is made up of simple vowels that come before y or w. The McCune-Reischauer romanization tells the difference between the unrounded vowels [] and [] (= Seoul []) and the rounded vowels [u] and [o]. (You say rounded vowels with pursed lips and straight vowels with a tight smile.)
The Yale romanization uses u for the unrounded [] and writes [u] as wu. However, it suggests leaving out the w after p, ph (= p'), pp, m, and y, where the rounding is no longer important in modern Korean. The complicated Hangul symbols for ey and ay in the Yale romanization show that the front vowels written as e = [e] and ae = [] or [ae] were originally two sounds joined together.

Southern Korea and modern Seoul don't tell the difference between ae and e anymore, but the spellings do. Another old diphthong, which started out as [oy], is written as oe (Yale oy). It can sometimes be heard as a front rounded vowel [o], but it usually sounds like the less common diphthong we, which is often shortened to just e. For example, the last name Ch'oe can be said as if it were written Ch'we or Ch'e. Most people say [uy] as [wi], but some say [ü]. The old diphthong I [y], which ăe [y] merged into, was mostly replaced by [] (initially) or I, but it is still used to write Chinese phrases like ii I "meaning" and the particle -i [e] "of" (but not the homonymous particle -e "to" or "in").
The "reading" pronunciations of words like "ija" ("chair") have brought back the diphthong.

Initial p, t, and k are pronounced like English (pie, tie, kite) with light aspiration. They are cut off without release, like "Up! Out! Back!" in English. Chip "home" is spoken with a sound halfway between English chip and cheap, but some people, especially before back vowels, pronounce it as a nonpalatalized [ts], which is regarded to have been its 15th-century pronunciation. The McCune-Reischauer romanization (but not the Hangul spelling or the Yale romanization) notes that stops acquire voicing between voiced sounds (which include the vowels and y, w, m, n, ng, l, and r): ip "mouth" but ib-e "in the mouth," mat "firstborn" but mad-adl "eldest son," and ak "evil" but ag-in "evil person." Final -p can be a basic p' (ap ‘front' but ap'-e ‘in front') or ps [pss]. (kap "price" but kaps-il "price as object").

A final t sometimes represents a fundamental t' (mit ‘bottom' but mit'-e ‘at the bottom'), j (nat ‘daytime' but naj-e ‘in the daytime'), or ch' (kkot ‘flower' but kkoch'-ida ‘it's a flower'); more often, it represents a basic s (ot ‘garment' but os-l ‘the garment [as object]'). Some speakers regularise the basic forms of nouns (but not verb stems) so that the nonfinal t always represents basic s. They pronounce pas-ey for pat'-ey ‘in the field'. The single liquid phoneme has two predictable pronunciations: a clear (and sometimes palatalized) lateral [l] at the end of a syllable or doubled [-l:l-], otherwise (and before h) the flap [r]. The McCune-Reischauer transcription writes l or r according to pronunciation, unlike the Hangul spelling and Yale romanization: il "one" but ir-wən "one Wən," nal "day" and nal-lo "by the day" but nar-e "on the day." “President Roh (pronounced No)” in newspapers has initial r and n issues. Koreans tried to pronounce Chinese words beginning with a liquid ([l] in Chinese) with a r, but only when the element was not initial.
When the liquid was initial, they used a n. Toro "street" and nosang "on the street" share the same second syllable (which is spelled with an n- in South Korea but with an r- in North Korea). In the south, ny- and ni- dropped the nasal, and the common surname derived from Chinese L became Yi. North Korea still pronounces the name [ni], whereas P'yŏngyang has adopted [ri] since 1945. Modern loanwords from English, Japanese, and Russian feature a flapped beginning [r].

Simple syllables are pronounced. Each ends in a vowel or a voiced consonant p, t, k, m, n, ng, or l. Two syllables joined may change. When a syllable that ends in a stop is followed by one that begins with a nasal, the stop assimilates: chip ‘house' + -man ‘only' sounds like chim ‘burden' + -man [čimman], hence kung-min can mean either ‘the people of the nation' or ‘the poor people'. Basic forms separate such couples in Hangul spelling. Before a velar (k, k', kk), the dental n is normally pronounced like the velar ng, so kan'go "hardship" sounds like kanggo "stability," but the spelling and transcription omit that assimilation. For the sound [-l:l-], one must know the word to choose one of the three Hangul spellings.

Despite seeming distinct, Korean and Japanese sentences are comparable. Modifiers always come first. Unmarked subject, indirect object, direct object, predicate. Only the predicate is required. Processive predicates (verbs) like məgə ‘[someone] eats [it]' and anja ‘[someone] sits' convey actions, while descriptive predicates (adjectives) like təwə ‘[it] is warm' and cho(h)a ‘[it] is good' (or ‘I like it') express traits. The closely linked copula (linking verb) predicates nouns, like ton–i(y)a ‘it's money' and ch'a–'ya ‘it's tea.' The descriptive predicates can only make statements or questions, but the processive predicates can also make commands and recommendations, so (depending on intonation) anja can mean "I sit," "Will you sit?", "Sit!", or "Let's sit!"; təwə means simply "It's warm" or "Is it warm?" The predicate is an inflected form consisting of a stem and an ending: məgə is the stem mək- "eat" and the infinitive ending -ə, which takes the shape -a when the preceding vowel is an or o, as in anja from anch- "sit" and cho(h)a from choh- "be good/liked," and also (when the infinitive is sentence-final) in the copula i(y)a from the stem i-. As in məgə-yo and cho(h)a-yo, the copula is ie-yo or '(y)e-yo, as in ton–ie-yo and ch'a–'e-yo. Particles indicate noun roles. The subject is denoted by -i after a consonant or -ga after a vowel (although in the 15th century, -y was used), and the direct object by -l or -ll. These case markers are commonly removed or hidden by particles of focus like -do and -to "also, even" to emphasise a word and -n (after a consonant) or -nn (after a vowel) to background a topic. :məni-ga ttar-(h)ant'e ton-l chue marks the indirect object. ‘Mother gives daughter money.'

The negative copula expression turns [noun] + i- into [noun]-i/-ga + ani–(i)-, as in ton-i ani'ya ‘It isn't money' and ch'a-ga ani'ya ‘It isn't tea.' In short sentences, verbs and adjectives can be negated by preposing the adverb an(i), as in a məgə ‘I won't eat it,' but a more versatile device allows negation of even long sentences by converting the verb to an inflected form that ends in -ji or -chi (pronounced ch'i), followed by the auxiliary anh- ‘not do/be,' a contraction from ani ha- (the negative adverb + the dummy verb ha- ‘do/be'): I don't eat it. chuji an(h)a "I don't give it," choch'i an(h)a "It's no good." Predicates can be combined with endings that imply "and" (-go/-ko, -ə/-a–sə) or "but" (-na/-na, -ji/-chi–man) and subordinated with endings that mean "when/if" or "even if" (-ə/a–do).

Like English relative clauses, Korean ends adnominalize a predicate (modify a noun): uri-(h)ant'e ton-l chun saram ‘the folks who handed us the money' saram-i uri-(h)ant'e chun ‘people's money' saram-i ton-l chun uri "we who received money" saram-i uri-(h)ant'e tonne chib-i man(h)a ‘Many houses donated us money.' The honorific marker -()si-, shortened to -()sy- before a vowel, designates the subject as special ("you" or "the instructor"). Predicate tense and aspect can also be marked. These instances are informal, but there are others. Statements, questions, commands, and suggestions are marked with -(s)mnida, mnikka, psio, and psida in formal style. In the plain/impersonal style, declarations are -da, queries are -na or -ni, commands are -ra or infinitive + ra, and suggestions are -ja/cha. Koreans sometimes use -ji(-yo) to emphasise their involvement.

Go to class >>
Start learning Korean with our FREE beginner classes, learn at your own pace.

Go to class >>
Once you have completed the beginner course, you can move onto our intermediate classes.

Go to class >>
For more advanced students, once you have mastered the intermediate classes, try some more complex examples.

Go to class >>
Have a look at some of information about Korean cities and other resources that are available.

Check out some of our FREE lessons on Learn Korean.

Start learning Korean from the basics.

How to learn korean?

You will learn new material in stages, and you will also have access to a forum where you and your other students can seek assistance from our instructors as well as from one another. If you decide that you want to advance your language learning, we will also provide you with help and recommendations regarding a wide range of online language learning tools that you can use. This will make it possible for you to realise your goal. Since each student's speed of learning should be tailored to their ability, we encourage all students to acquire knowledge at their own pace.

How to study Korean?

We would love to hear some feedback from you guys about classes and toppics that you would like to seen from our learning korean classes and tutorials, feel free to email us with your suggestions or leave feedbacks on our wall.

Here at Learn Korean, we are pleased to announce that we have updated our Learn Korean forums so now you can sign up and join for free. Your old passwords wont work for the new site, so you will need to set new ones up for it.

Discover our other services